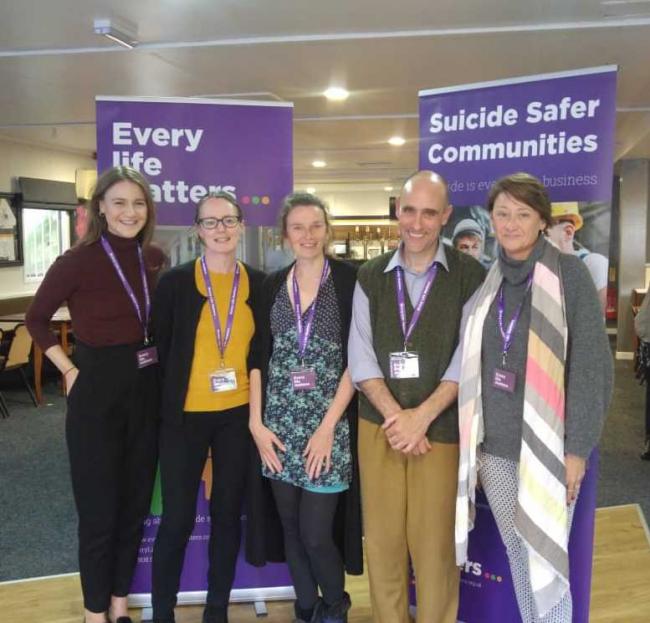 A new project which aims to reduce suicide across West Cumbria has been launched in Copeland.

It is being delivered by Every Life Matters, a new suicide prevention charity set up to address the county’s high suicide rate.

Suicide Safer Copeland aims to shatter the stigma, increase understanding of when someone is at risk and raise awareness of the help available for people experiencing suicidal thoughts.

A launch event was held at Whitehaven RLFC on Tuesday night.

Kate Bainbridge, a trustee of the charity, who lost her son Ben to suicide five years ago, gave a moving speech about her devastating loss.

“I still find it incredibly hard to look at photos of him. It was his 32nd birthday on Friday. He is eternally 27.

“He was my gorgeous boy. He was one of the most caring people I knew. He cared about everybody he came into contact with.

“He had so many friends. He was really loved within the community.

“We didn’t know. We had absolutely no idea that Ben had thoughts of taking his own life.

“Out of the blue I got that phone call that changed my world completely and it continues to change my world every single day. Every family event there is somebody missing. There’s an empty place at the table.”

A key focus of the suicide prevention project is empowering people to take action against suicide in their communities, workplaces and in their own homes.

Kate said: “Every one of you in this room could make a difference. You could ask somebody whether or not they’re ok. You could find out where to point people in the right direction. You could do suicide awareness training. It’s everybody in this community.You could be the ones responsible for saving someone’s life like Ben.

On average, one Cumbrian dies by suicide each week. One in five Cumbrians will have thoughts of suicide, and one in fifteen will attempt suicide at some point in their life.

Cumbria’s suicide rate remains consistently higher than the national average, and a number of deaths are in the west, including Copeland.

Speaking at the event, trustee Juliet Gray, said: “Those figures are quite sobering. What we need to be aware of is those numbers are lives and every life lost has a huge impact on those around us.

“We need to get talking about it a lot more. Suicides are preventable not inevitable.”

Those who attended the event came up with a number of ideas of how the whole community can improve the situation. Suggestions included targeting schools, setting up an online support hub and creating an app to access mental health services.

Rachel Holliday, director of Egremont homeless hostel, Calderwood House, was at the event. She said: “Attending Suicide Safer Copeland has totally changed my mind about the help and support out there for people in need.

“So many people who come through Calderwood House have these thoughts and listening to these speakers today, it’s about all of us in our community reaching out and helping them get through it.

“It’s not just down to one person or organisation.We don’t know who in our community is feeling this way.

“With suicide being so high in Copeland, this is a fantastic campaign and a great place for everyone to start.”

He said: “Suicide is a big issue in the area. It’s huge. Unfortunately we see the aftermath of it but it’s how we can work together to prevent that in the first place.”