The Covid-19 crisis has been really challenging for our mental health and its more important than ever that we look out for each other. 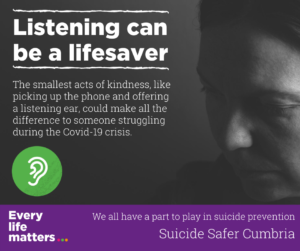 We can all play a role in helping people whose mental health is at risk.

Social isolation, uncertainty about money and housing, lack of access to coping mechanisms and activity that underpins our wellbeing, have all stoked up the pressure on us. And its quite normal to be feeling anxious right now, or that your life feels out of control.

We can all play a role in helping people whose mental health is at risk. The smallest displays of kindness, like picking up the phone to check-in on someone, and the conversation that follows, could make the difference. You don’t need to solve their problems and knowing someone cares could be enough to get them through. And perhaps even save a life.

Show interest in the people around you. Watch for the warning signs that someone might be struggling. This is more challenging during right now, and we may need to be more pro-active about checking in with others by phone and online.

Show you care through asking questions about how they are thinking and feeling. Trust your instincts and ask the person directly how they are doing. If you feel they may be struggling let them know that you are worried about them and that you care. But remember many people struggle to reach out for support and sometimes we might need to ask, and ask again, “How are you?”. If you are worried about someone don’t be content with an “I’m alright mate”.

Give them time and space to talk and be helpfully nosey. Talking about our fears and feelings can be difficult, even to those closest to us. Be patient and give re-assurance. Have at a look at our key listening tips below.

Explore what help they might need. Build a circle of support through family and friends. Have a look together at what range of help is available to support their mental health or other problems in their life such as debt, employment, relationship problems and so on. Visit https://www.every-life-matters.org.uk/get-help/ to find out more. Set goals about what they can do next. And if it’s useful attend appointments with them or help them plan what they want to say.

Keep Checking in and letting the person know you are there for them. Knowing someone cares can make all the difference. 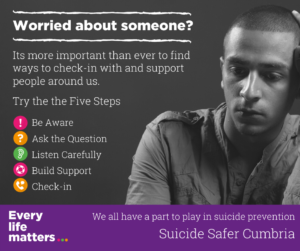 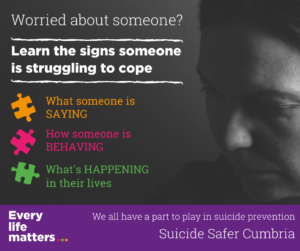 Be Vigilant. Look out for signs that someone might be struggling to cope.

What someone is talking about

How someone is behaving

Many people struggle to reach out for support and sometimes we might need to ask, and ask again, “How are you?”.

If you are worried about someone don’t be content with an “I’m alright mate”. Be helpfully nosey, and be patient. Let them know why are concerned, and that you are there for them.

The smallest displays of kindness, like picking up the phone to check-in on someone, and the conversation that follows, could make the difference. And perhaps even save a life. 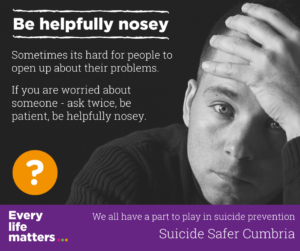 One of the best things you can do for a person who is struggling with their mental health or having thoughts of suicide is to simply encourage them to talk about their feelings. And to make sure you really listen to what they’re saying. Don’t ever be put off approaching someone because you don’t know what to say.

Avoid offering solutions – Talking about someone’s problems is not always easy and its often tempting to try to offer solutions to their problems such as ‘Have you thought of doing this?’ or ‘You should try that’.

Give them time – It helps if you let them take the time they need to describe where they are at. Make sure you have time to listen. If they feel unable to speak fully at that time, acknowledge the importance of what they’ve said and arrange another time to talk.

Take their feelings seriously – Take whatever they say seriously and without judgment, including their reasons for dying. Don’t offer platitudes like ‘things will pick up’, ‘Life’s too short’ etc and don’t minimalize their feelings by saying it’s ‘just a phase’, ‘you’ll grow out of it’ or ‘why is that even bothering you?’

Avoid judgements – You might feel shocked, upset or frightened, but it’s important not to blame the person for how they are feeling. They may have taken a big step by telling you, and comments such as “Don’t you think you might be drinking too much?” can make the situation worse.

You don’t have all the answers – It’s okay to not know what to say! You’re a human being too and what you’re hearing might be frightening and confusing. If you don’t know what to say – be honest and tell that person.

Reassure them that you are glad they told you – this can be far more empowering and genuine than making something up. If you’re honest with them, they’ll be honest with you.

Ask open questions – These are questions that invite someone to say more than ‘yes’ or ‘no’, such as ‘How have you been feeling?’ or ‘What happened next?’

Offer prompts – We can encourage people to talk more through phrases such as ‘Tell me more’ or ‘Can you say more about that?’ or even simply reflecting back an important word or phrase the person has used such as ‘Overwhelmed?’ or ‘No point?’

Give reassurance – That you are there for them and there is support available. You can look together about what organisations and services might be there to help with their problems.

Don’t tiptoe around suicide – There is still a taboo around talking about suicide which can make it even harder for people experiencing these feelings to open up and feel understood. If you are worried about them ask directly – ‘Are you having suicidal thoughts?’ or ‘Are you thinking about suicide?’

Take any thoughts of suicide seriously – People who talk about suicide do sometimes act on their feelings – it’s a common myth that they don’t. It’s best to assume that they are telling the truth about feeling suicidal.

Being there to listen and to provide emotional support can be a lifesaver.

In addition to the general signs someone may be struggling with their mental health problems listed above, someone having thoughts of suicide might;

Talking about suicide with someone can feel nerve-wracking but the best thing to do is ask directly. “Are you thinking about suicide?” This will not put ideas in their head and will show them they don’t have to struggle alone with these overwhelming thoughts. 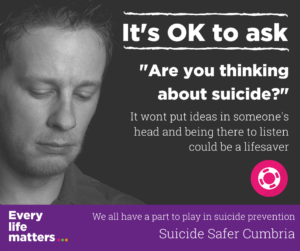 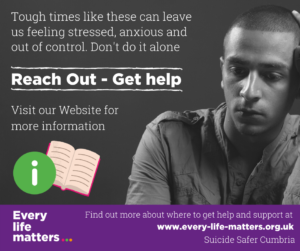 Encourage people to reach out. There is help and support available.

A wide range of ways to get help and support are listed on our website https://www.every-life-matters.org.uk/get-help/ including talking therapies, self-help guides, peer support groups, online help and apps.

Help and support is available both for someone’s mental health and the problems that might be causing the person distress, such as debt, housing, relationship or employment issues.

Encourage them to share their thoughts and feelings with a good friend, a relative or a work mate.

If it feels hard to find the words, the y can speak to someone who is trained to listen, like the Samaritans on 116 123, or other telephone/text helplines. You can talk to them about whatever’s getting to you, in your own way, and they can also help you explore the range of help available.

Encourage them to contact their GP or ring NHS 111. And to be open about how they are feeling. Help them plan what they want to say, and if they want, accompany them to the appointments.

Watching to much news? Top Tips for managing Covid-19 anxiety

Things we can do to look after children’s mental health during this crisis.

Simple ways to maintain happiness and productivity while working from home.

Check-in, keep contact and to offer support to those around us.

Browse our directory for more information about the Support and Services available to you...